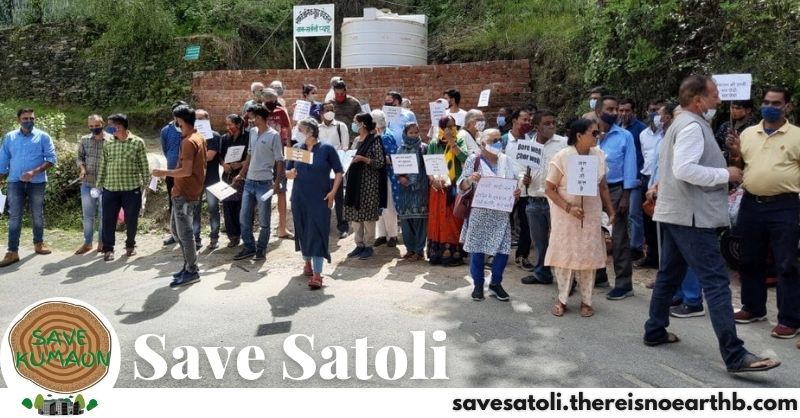 Amidst the loud thunderstorms, there is a strong people’s storm that has been gathering momentum in the Himalayan region of Kumaon in Uttarakhand.

On 19th September, in the small village of Satoli in Nainital district, the locals took out a protest against the installation of an illegal borewell that is providing water for making commercial buildings. They have been struggling to safeguard the environment and resources of the ecologically sensitive Himalayan region since the past few months. The locals have filed a complaint, as the borewell has not just been constructed illegally, but also is likely to disturb the ecology of the area, impacting other water resources and making it more prone to earthquakes.

The villagers of Satoli, Peora, Diyari, Chatola, Satkhol, Sitla, and neighboring areas, as well as youth leaders, environmentalists and NGOs held a peaceful gathering against a borewell that has been dug for commercial misuse under the garb of residential use at gram Satoli (Patti Malli Kutoli, District Nainital). All established laws, norms and guidelines have been flouted, unleashing a trail of destruction with regards to water resources. 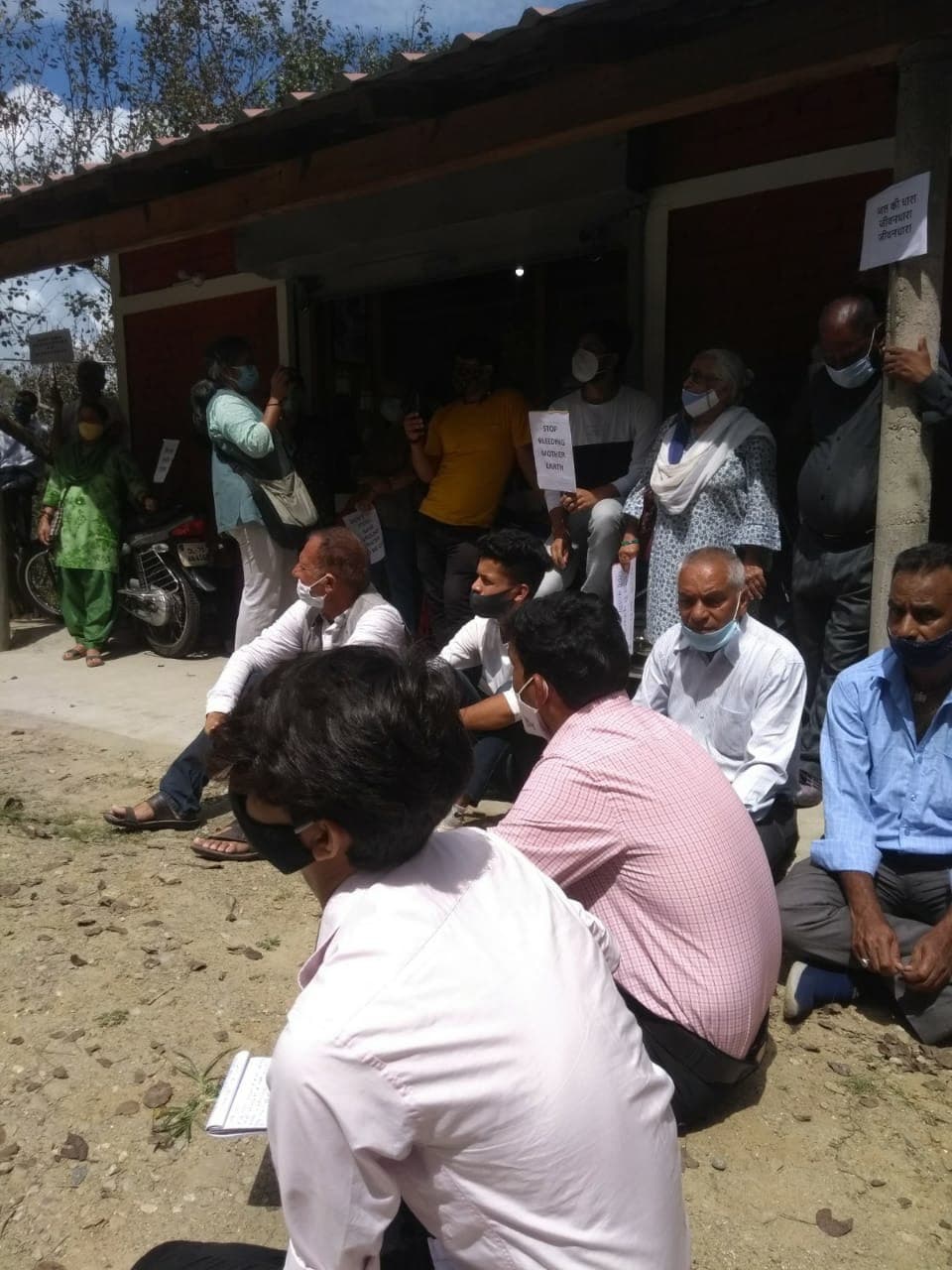 This has caused immense anxiety and anger among the residents. The borewell has been dug by a non-resident of Satoli under the name of residential use, but in practice, the water is being misused and diverted by builders for construction of high-end villas in Satoli.

The permission for a borewell was granted 10 years ago under the purview of the absence of even a handpump in the concerned location. However, now under the ‘Swajal scheme’, the government pipelines are supplying drinking water and there is no need for a borewell for personal use/ individual use and yet the borewell permission was granted. After the lapse of the previous permission, a new permit was given within 24 hours without considering the ground realities and the significant change in circumstances. Moreover, the permission was granted without due procedure. Neither the villagers were consulted nor an inspection or verification was conducted by a special hydrologist, both of which are important to ascertain the impact on the ecology of the concerned area. 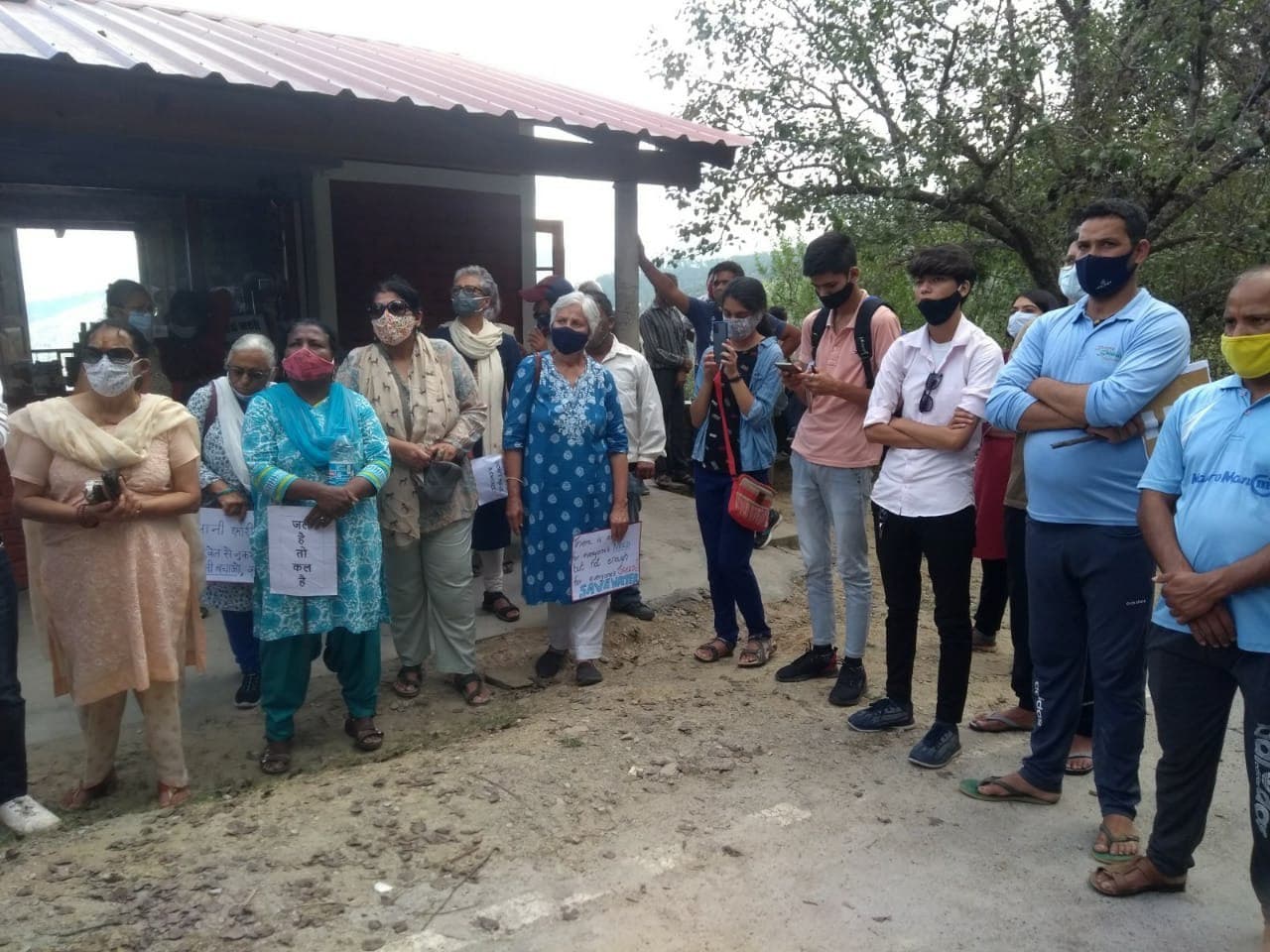 Further, various important programs in the area of health, education, livelihood and women empowerment being run by AAROHI, a prominent and reputed NGO in gram Satoli, will also be negatively impacted. 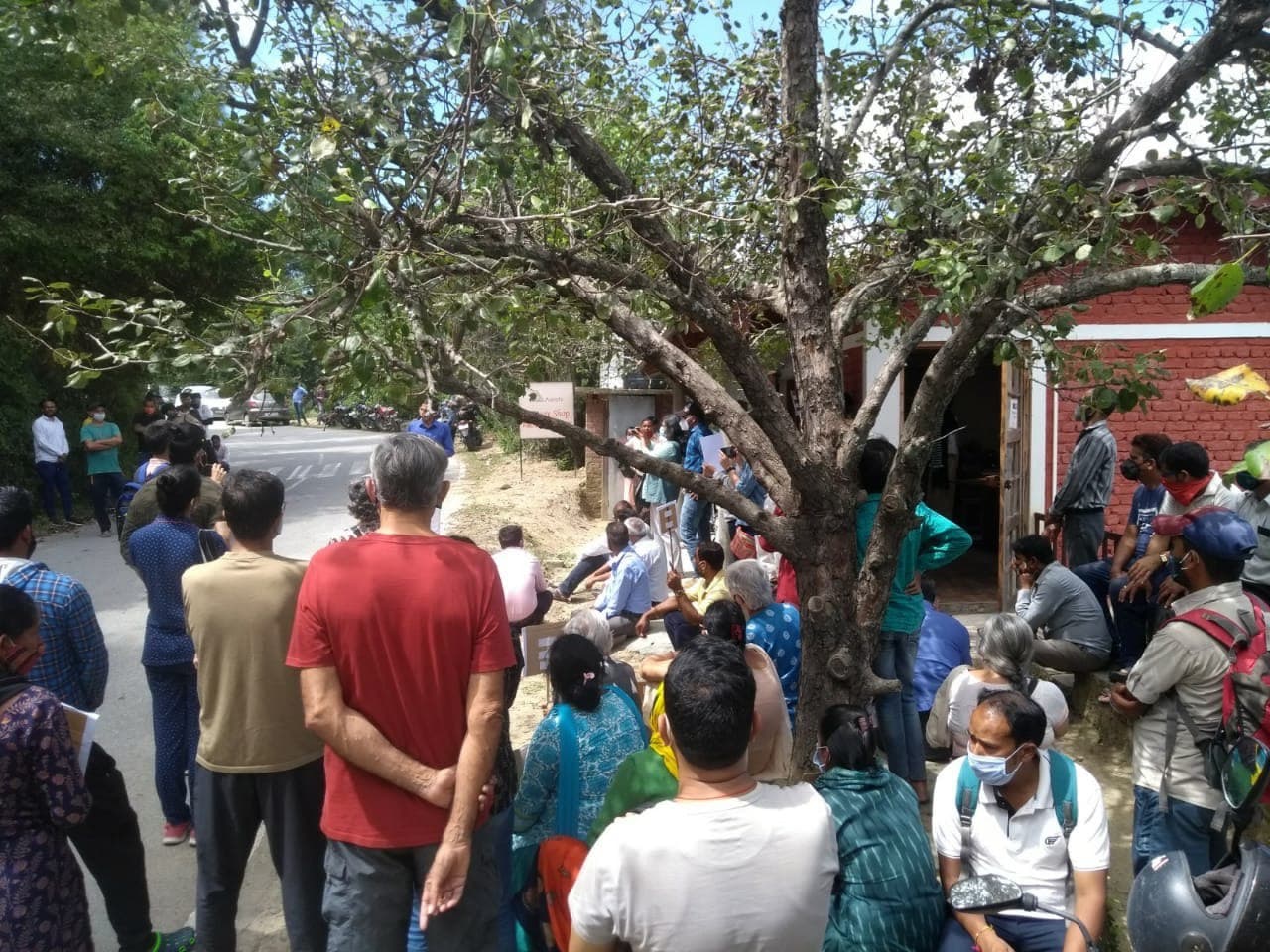 It is relevant to point out that the very same builders have been in the eye of the storm for encroaching on government land in the nearby village of ‘Chatola’. A PIL, against the encroachment in ‘Chatola’, has been filed against the builders in the Nainital High Court. The Court has sent a notice to them, making it incumbent upon them to respond to the charges leveled against them. 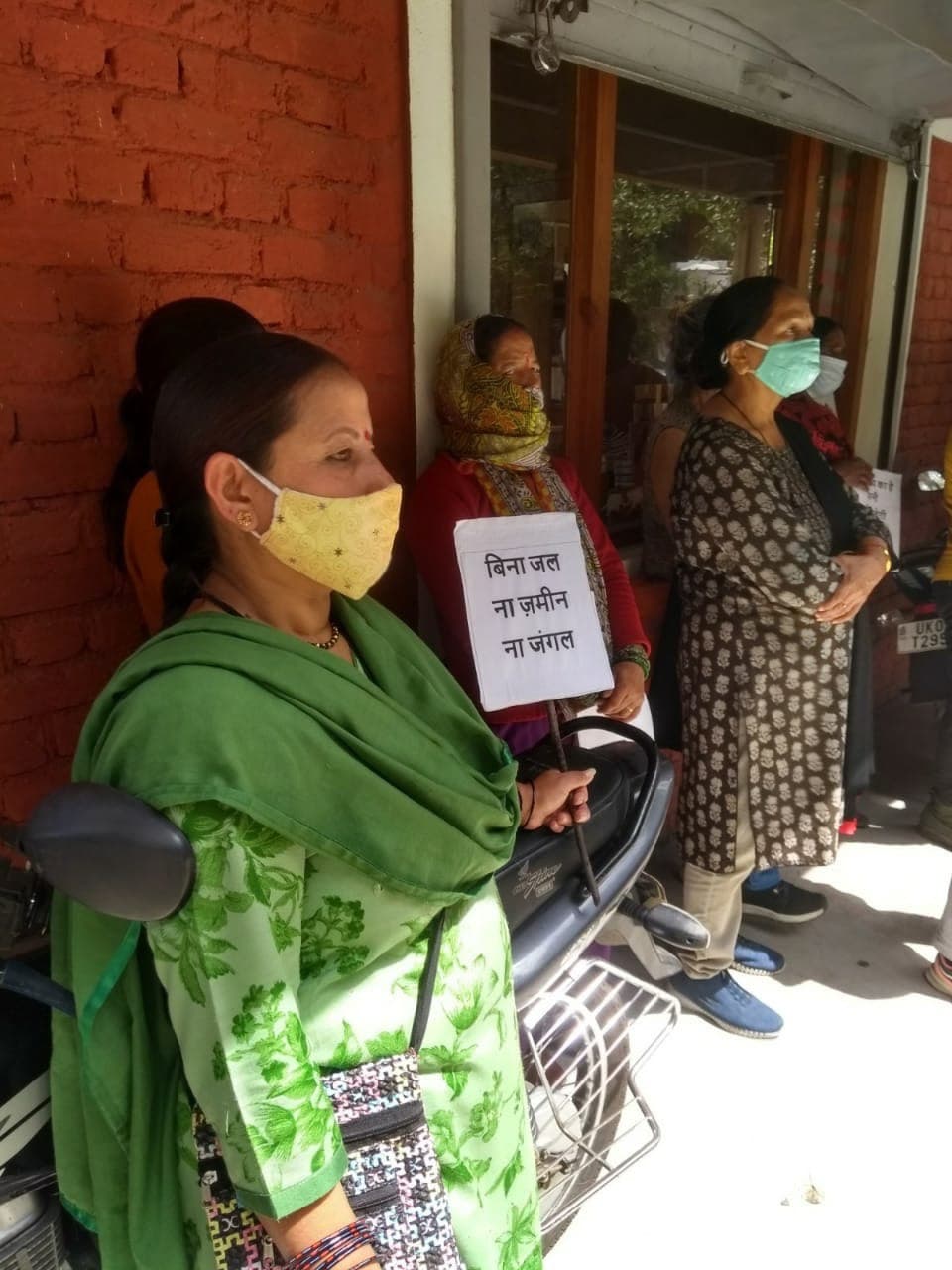 Digging borewells in ecologically sensitive hill areas is a recipe for disaster. Since hilly areas do not have a water table under the surface, borewells draw on all available water channels. The most disturbing aspect of a boring activity in the hills is that it taps into or cuts through the water channels and sucks out the water from the capillaries, ultimately leading to drying up of the water source of villages at lower altitudes.

Dr. Vishal Singh, Executive Director CEDAR (Centre for Ecology Development And Research) expressed his concerns regarding the use of borewells. He explains that

“Springs and streams are the most important sources of water for the people living in the Himalayan region. Over the last few decades, Borewells have become increasingly popular, across the Himalayas. The science behind the connection between Borewell and Springs is not very robust. However, if you go by common logic, it is not lost to anybody that when a Borewell and a spring share a common aquifer and extract water at different rates, the impact on the Springs would be much higher leading to low discharges and eventually drying up. In the Himalayan region, We should focus more towards nature-based solutions and our traditional water systems, which have been there for several hundred years. These unsustainable practices of extracting water at a faster pace in the name of development should be completely avoided.”

Needless to say, groundwater abstraction is highly regulated by law, given the devastating impact it has on the environment, misuse of groundwater is a punishable offence.

A plethora of judgements by the Hon'ble Supreme Court, National Green Tribunal and High Courts have held that it is the legal obligation of the state to act against those who violate the law and misuse natural resources of the country.

Pertaining to this borewell in gram Satoli, around 150 residents are signatories to letters highlighting this wrong-doing and demanding action from the authorities. Letters have been sent to:

The residents demand justice against this flagrant violation of the laws of the country and have pledged that they will stay united and continue their fight to the end.

Prominent speakers and attendees at the peaceful dharna:

Dr. Col CS Pant: Chairman AAROHI, a reputed NGO headquartered in Satoli and a renowned radiologist in the country was present at the Dharna and he made an impassioned plea against the digging of a borewell in Satoli, According to him,

“ This poses a huge threat to water supply in Satoli and surrounding villages. The future of children who study in the school run by Aarohi, the hospital which provides much needed medical aid to villagers, livelihood programmes which empower people here, all of it stands to be negatively impacted. It is totally against the interest of our people and must be stopped.”

“If we do not raise our voices against actions which are damaging our natural resources, the future generations will face a very bleak scenario”

Bhim Bisht from Peora, representing the hope and aspirations of people said that,

“We the people have to come together and not turn a blind eye to the devastation around us. If we choose to remain quiet against the destruction of mother nature, we will be equally complicit of wrong-doing. I am here despite my family’s reservations about my coming here. I will stand against every such act which is an assault on our natural resources.”

Krishan Bhandari: a local villager / farmer from gram Kafura thanked everyone present at the Dharna and said,

“If not us residents, then who will stand up against the destruction of our beloved Kumaon. It is tragic to see that an illegal borewell has been dug here in complete disregard of its impact on villagers.”

'Save Kumaon' is a Citizens movement by the people, of the people and for the people of Kumaon to raise awareness and protect Kumaon and its biodiversity. Specifically, the biodiversity of Chatola, Sattal and Satoli. They do not have any political or religious affiliations. They may be reached: [email protected]

There Is No Earth B is an ally of the Save Kumaon Movement and is providing them with legal, artistic and technical support. We aim to contribute towards the building of inclusive, organic and decentralized Climate Action and Advocacy movements. We may be reached: [email protected]